My name is Andy.

I have enjoyed board games/tabletop games for a few decades now.  Being a 70’s kid, my start was the same as most at that time with Scrabble, Monopoly, Sorry! etc. 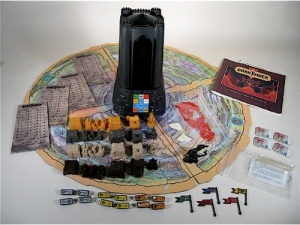 Then in 1981, along came “Dark Tower”, a fantastic new board game with an electronic ‘Tower’ in the centre to provide you with the outcome of your actions.  A simple game with a simple premise; travel around the Kingdom, visiting bazaars and ruins, build up your forces, find the keys to unlock the Dark Tower for a final battle.  The 10-year-old me loved this game and would play it whenever I could convince friends to join in.

My enjoyment of games continued with the likes of Stratego, Risk and Escape From Colditz until, in the early 90’s, I discovered the enjoyment of miniatures games in the form of Man O’ War, Blood Bowl and Necromunda; especially the latter two.

I have to admit, I have never been a fan of the Games Workshop ‘campaign’ games; I have always found them too expensive (in the long term) and take up too much space (which I didn’t have).  However, these smaller, faster and mostly self-contained games were another matter.  The big bonus for me was that if you wanted a new Blood Bowl team or a new Necromunda gang you bought that team/gang in a single box for £10 and you could start developing them and gaining experience.

Eventually, life and digital gaming got in the way; working away, SNES, Playstation (1).  Until a few years back, I was introduced to Settlers of Catan, Dixit, Lords or Waterdeep, King of Tokyo, to name but a few; this wonderful new world of games that I’d been missing out on.

Since this time, my collection of games has been increasing (and my bank balance decreasing), to the point that once again I am running out of shelf space.

Which bring me to this … a number of years ago, I thought of opening a licenced Cafe in the area.  I came up with a name, grabbed the domain and … well, that day has just got further and further away.

So as time has gone on, I figured I should do something with that name, so here it is; what will probably by a growing collection of ramblings and thoughts.